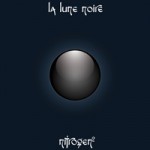 The album was recorded and mixed at studio “De Muziekkamer”. svenART productions has created the Artwork with Wilke Fotografie as photographer. The CD was duplicated and printed by “De CD Perserij”